The OFRN is a program managed by Parallax Advanced Research in collaboration with Ohio State and funded by the Ohio Department of Higher Education. The OFRN’s SOARING projects leverage Ohio’s unique aerospace assets to assist recipients in overcoming critical technical barriers and business challenges to enable more widespread adoption of UASs into the national aerospace.

Dr. Daniel Gauthier, professor at the Department of Physics at Ohio State, was working on a new version of PUF technology when he saw it listed as an area of interest by the National Air and Space Intelligence Center on the OFRN SOARING Round 4 solicitation. This led to Ohio State getting connected with the OFRN, and the OFRN connected Ohio State to Asymmetric Technologies, which led to the PUF technology being implemented in Asymmetric’s IronClad Flight Controller project; IronClad is also funded through the OFRN Round 4 SOARING initiative.

Research for the advanced PUF and EED was started by Dr. Gauthier and Dr. Andrew Pomerance, president at Potomac Research LLC, in response to a solicitation from the U.S. Army for developing physically unclonable functions that specifically use field-programmable gate arrays. After successfully qualifying for a Phase I U.S. Army Small Business Technology Transfer (STTR) in 2018, Ohio State and Potomac won a $1.1 million Phase II U.S. Army STTR award in January 2020 for further research. The project was recently invited to apply for Phase II follow-on funding.

Dr. Emre Koksal, professor of Electrical and Computer Engineering at Ohio State, is the information theory expert for the project, and Lockheed Martin, a key advisor for proper measurements and metrics assessments, is interested in this technology for its customers. For commercialization, the EED design is licensed to Verilock, a spinout company co-founded by Dr. Gauthier, Dr. Pomerance, and Verilock CEO Jim Northup.

With widespread and increasing use of drones across business and defense sectors, there is need for a technology to authenticate the drone, with which ground control stations are communicating, is genuine.

“There are potential ways to spoof the radio frequency signals that are being sent from the ground-station to the drone,” said Dr. Gauthier. “The IronClad setup is one of the few flight controllers that encrypts data sitting in memory on the controller itself and encrypts the radio frequency communication. However, some of the public key encryption technologies that are in use are potentially hackable or breakable in the future. With our EED project, we're looking for additional levels of security that would be future-proof and deter potential sophisticated cyber-attacks.”

The goal for this device and its advanced encryption process is to create an electronic circuit that will produce bits or sequences of numbers that are specific and would act like a fingerprint to that device set. This fingerprint is so minute that it would be impractical, even impossible, for someone to clone it, thus making it an unclonable device that bolsters cyber-security and control station authentication abilities. To operate the EED, a control station sends a pattern of bits, called “a challenge”, to the device. After receiving the challenge, the device generates a new sequence of a bit pattern, called “the response pattern”, that corresponds to the challenge. Since the response pattern is unique to that device, it becomes impossible for a hacker to spoof.

“So, even though I might try to duplicate many of these devices, the variations in manufacturing are so minute that they cannot be copied. This ensures that the response pattern is different for every single device,” said Dr. Gauthier.

The EED and PUF technology anticipates that another advanced technology might be able to break the existing security routines someday. This research is in preparation to prevent major security breaches in such scenarios.

“We're thinking that some years down the road, a lot of the standard cryptographic techniques are potentially breakable if you were to have access to something called the quantum computer. Our technology would be able to prevent major damage in that situation,” said Dr. Gauthier.

While physically unclonable functions have been around for a while, currently available devices are relatively “weak PUFs” in that they produce a relatively small number of patterns or responses resulting in weak security. Some applications that require the highest-level security need the number of bits that the device can produce to be so huge that you could never send the same challenge pattern to the device. One could keep picking new patterns, one after another, and essentially never run out of unique patterns in the lifetime of the device.

“Our devices typically produce about 1070 patterns, which is an astronomical number impossible to hack. Dr. Koksal is the expert who comes up with mathematical techniques that analyze the data and quantify some of these key metrics that are important for its behavior,” said Dr. Gauthier. “Additionally, these patterns are never stored on any PUF device, which makes it even more secure from cloning during manufacturing by an entity with advanced resources; for example, a state actor.”

Ohio State and Potomac Technologies, through Verilock, are now planning extensive testing on numerous types of chips to build customer confidence in adaptability of the EED and facilitate robust commercialization opportunities.

“Customers want to see testing on a lot of different chips to verify that the technology really produces unique keys across many different devices,” said Dr. Gauthier.

The collaboration ran into chip shortage due to COVID but designed its own custom boards to work through the issue and is now back into extensive testing.

When discussing the promising future of their device, Dr. Gauthier said, “We've published an academic paper on it that appeared recently in the Institute of Electrical and Electronics Engineers (IEEE) Access Journal. We also know from our success with the U.S. Army STTR Phase II award and the invitation to apply for a follow up Phase II award that there is high interest in our technology. We are now busy with testing and are looking to take the next step to commercialize.”

“It's incredibly difficult to identify people within the U.S. Air Force and the U.S. Army with needs and interests that match our technology,” said Dr. Gauthier. “Dave Nestic, Parallax’s SBIR/STTR Process Navigation director supporting the OFRN program, has been a great champion for our project, and Parallax has really been able to help us get important leads.”

Parallax Advanced Research is a 501(c)(3) nonprofit organization. Parallax provides efficient and effective contracting, security, and research support for academic institutions across the State of Ohio and the Nation. Together with academia, Parallax accelerates innovation that leads to new breakthroughs. Together with government, Parallax tackles critical global challenges and delivers new solutions. Together with industry, Parallax develops groundbreaking ideas and speeds them to market.

The OFRN has the mission to stimulate Ohio’s innovation economy by building statewide university/industry research collaborations that meet the requirements of Ohio’s federal laboratories, resulting in the creation of technologies that drive job growth for the State of Ohio. The OFRN is a program managed by Parallax Advanced Research in collaboration with The Ohio State University and is funded by the Ohio Department of Higher Education. 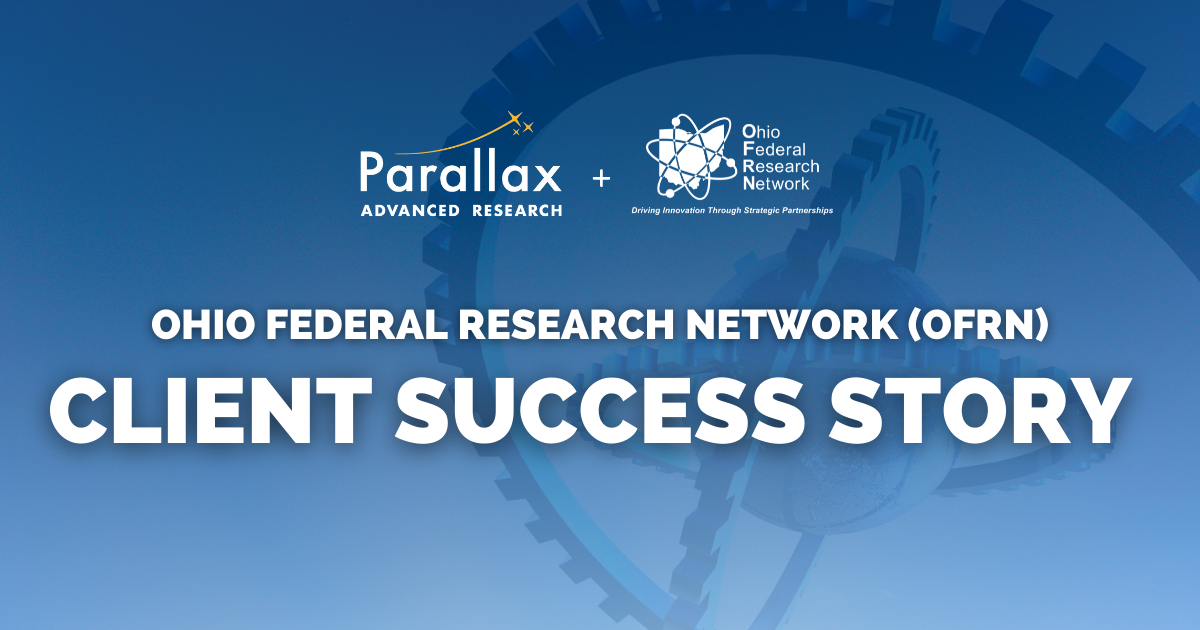