Beavercreek, Ohio – John Owen, program manager at Parallax Advanced Research, has been named as one of the Dayton Business Journal’s 2022 Class of Forty Under 40, which recognizes the most extraordinary business and community leaders under the age of 40 in Dayton. Owen manages four federal and state grant programs at Parallax Advanced Research that support the Launch Dayton community and provides resources and opportunities for entrepreneurs in the Dayton Region. The recognition was presented at a banquet held on July 14 at Carillon Park in Dayton. 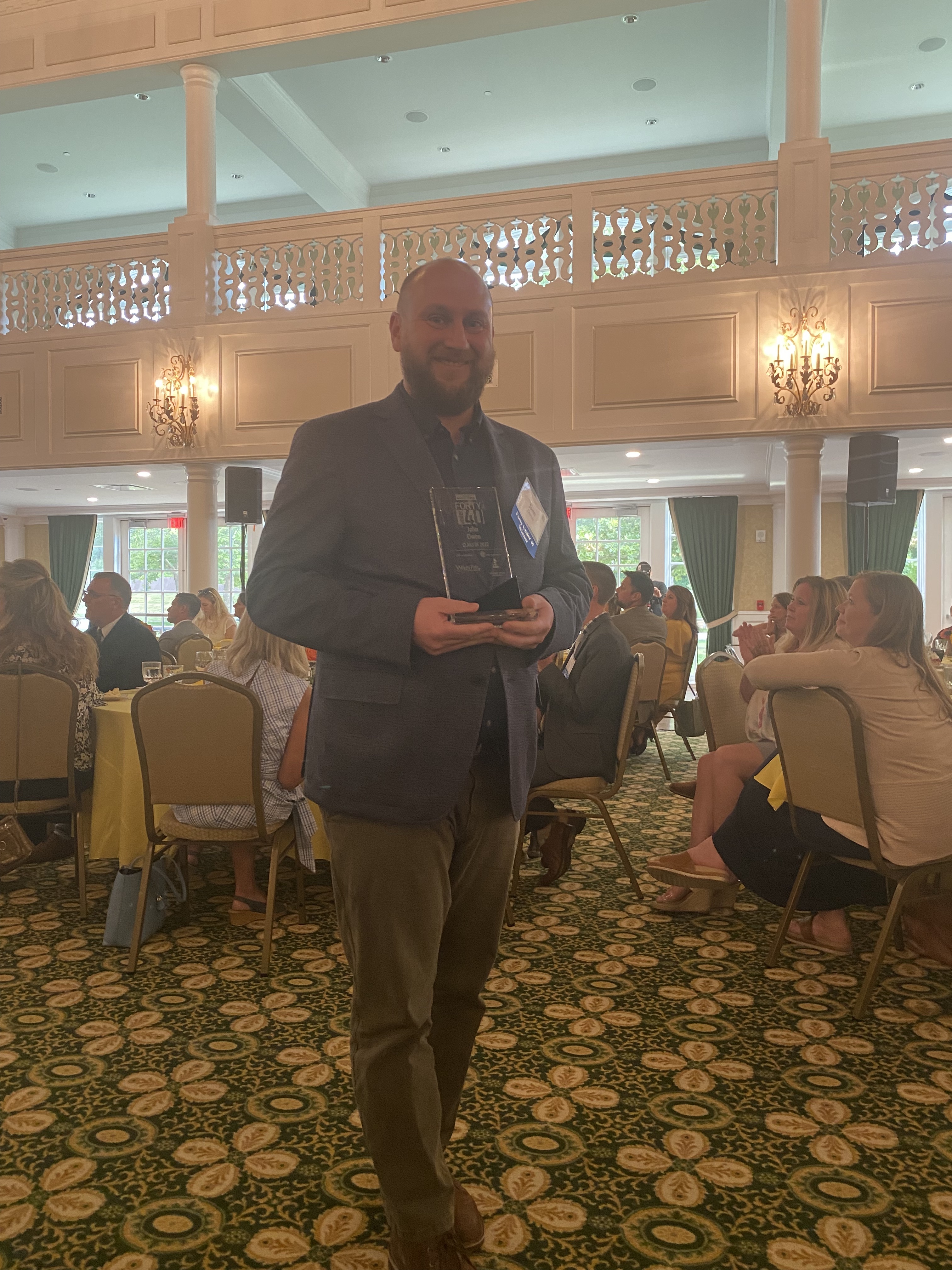 Parallax is one of 22 partners in the long-standing partnership that forms Launch Dayton, and Parallax’s team, led by Owen, runs a substantial portion of the backend support for that partnership.

“We manage all the communications channels, including the website newsletter, social media, and onboarding events or onramp events, such as Launch Dayton Startup Week, a conference for entrepreneurs with over 1,000 annual attendees, and LaunchPad – a monthly networking event for local entrepreneurs,” said Owen.

His role as a Launch Dayton program manager includes standing up for various programs and procuring the funding to make them happen.

Since starting this effort in 2015, Parallax’s team has supported 369 entrepreneurs through its programming and has had several thousand come through its events.

“Launch Dayton’s goal is to build an equitable entrepreneurial ecosystem that reflects the community in Dayton and create an environment where anyone has the opportunity to determine their own economic success,” said Owen.

According to Owen, the biggest success his team has had is with organizing community engagement through events, social media, and other marketing channels.

“When we first started this work, the majority of our efforts involved reaching out to people and telling them that our resources were available if they were starting a business. We asked them what they needed to get started, and the most common answer was: ‘I don't really have friends that are also entrepreneurs. I need a community. I need people that I can talk to that understand what I'm going through.’ I would say that our success is rooted in pulling together that sense of community. Our programming and resources help people grow,” said Owen.

Over the last few years, as Owen and his team have helped create need-based programs and sought funding to execute them, the biggest challenge the team has faced has been keeping pace with the growth of the Dayton entrepreneur community.

“The entrepreneurs that we met with seven years ago have outgrown the programs and resources we have available for them. So, a big struggle is keeping up with and building new programs and resources and efforts to continue to support the community as it grows. We overcome this challenge by constantly identifying common problems and trying to find funding to address those issues,” said Owen.

On being a Dayton Business Journal 40 under 40

Owen feels that the Dayton Business Journal Forty Under 40 recognition is a testimony to the work his team has done over the last seven years.

“If you look at the people who've received this recognition over the last five years, there's been an increased number of people from the entrepreneurial Launch Dayton community that have been recognized. That's very exciting! From a personal perspective, it's nice to be recognized for my work by a recognized name in Dayton,” said Owen.

Recalling his most memorable moment from the initial days of Launch Dayton, Owen shared,

“We sent out emails to all the entrepreneurs that we had met to inform them about the first week-long free education conference event that we were planning. During the months leading up to our event, we regularly held social events at local breweries and asked them to show up if they wanted to be a part of the community.”

For that first Startup Week, they found a vacant building in downtown Dayton that they were able to get for free from a developer they knew.

“We went in there, cleaned it out, brought furniture from our homes and set it up to look like a co-working space, rented some chairs, and put up a stage. We had 400 people show up that first year. That has been my favorite moment of just throwing something on the wall and hoping it sticks and then getting such a strong response. I'm currently working out of The Hub here in Downtown Dayton that’s almost 100,000 square feet of entrepreneurial and co-working space and classrooms for entrepreneurs. To go from sweeping out our own building to this gem of a space in Dayton is fascinating,” said Owen.

Just before the pandemic, the Launch Dayton-hosted Startup Week event grew to over 1,000 people, and the team is hoping to host more than 1,000 attendees in September 2022.

Talking about his experience working at Parallax, Owen said,

“Parallax has taken the time to put me into opportunities to grow and recognize that growth, and that means a lot to me. The team here invests in our employees and tries to find ways to recognize them. Over the last seven years, we’ve always had a close-knit team that is focused on our mission of building an equitable entrepreneurial ecosystem and supporting the people in the community, which makes my job easy and a lot of fun.”

Before joining Parallax, Owen worked at the Dayton Development Coalition, where he ran site selection for a 14-county region and did data analysis that told the story of why companies should consider Dayton. He was also responsible for the completion of the Innovation Index, a bench-marking document for the Dayton Region.

Parallax is proud of you, John! The stars are the limit!

Launch Dayton is a collaborative effort to connect entrepreneurs and business owners to peers, resources, and supporters and to tell the stories of our region’s thriving startup community. This community exists to support and inspire Daytonians who are starting and growing businesses. Launch Dayton partners believe everyone, regardless of their background, should have the opportunity to determine their own economic prosperity.